Naming and shaming sometimes isn’t all that gracious, but we can’t help but think that it’s sometimes necessary - especially if it helps others to avoid making their app the laughing stock of the town! Even if you’ve done your last minute app checks, mistakes can still happen. If we didn’t step in and assist, we’d just be helplessly watching the crash and burn and we definitely don’t want that to happen to you. We’re nice like that. You’re welcome.

They say that you should learn from the mistakes of others, so that’s exactly why we’ve written this blog post. We’re going to show you the worst apps ever developed, the lessons we can take from these fails and, in some cases (don’t worry - we’re not all bad), how they’ve managed to overcome this disaster. There’s hope for us all!

1. AMP UP Before You Score by Pepsi

Dear oh deary me. Anyone remember this travesty? In conjunction with the launch of their AMP energy drink, Pepsi developed an app that claimed to help guys ‘score’ with 24 different types of women and then… wait for it, brag about it. This really doesn’t need any more explanation as to why it failed.

The app was immediately pulled after overnight backlash, but y’know, they’re Pepsi. We’re sure they got over it quickly.

In any case, we have to thank Pepsi for making this mistake. It’s taught us that you really need to know your audience to be able to market to them well. Make sure you’re not excluding anyone else and especially not offending them.

Success in an app lies beyond the development of it. Find out how you can go further with yours in our free eBook!

We’ve always said that if your app idea isn’t necessarily original, make sure you’re doing what your competitors are doing, except better. Facebook’s app, Poke, is a prime example of when that didn’t happen. In any way. Whatsoever.

This app emulated - wait, sorry, that’s a lie - it COMPLETELY copied the premise of Snapchat; sending pictures to others with a time limit before it disappears. There was absolutely no original thought behind the creation. After a brief period of being the top spot in the app store, its position fell dramatically and quickly.

What we can all learn from Facebook’s fail is that you shouldn’t copy ideas, and if it happens that your idea is very similar to one that exists, make sure you have a strong enough USP that’ll make users want to download and stay loyal to you.

In theory, a kind of good idea?! Taxi Hold’em displays a large “TAXI” sign on your phone in bright yellow and black, in order to help you hail one down. We get it. They recognised a problem and they came up with a solution. Except it wasn’t all that thought through.

Imagine being a taxi driver with your eyes on the road. You spot a passer-by with some letters written on their phone. You squint your eyes, trying to see what the tiny screen says. Next thing you know, you’ve crashed into the car in front of you. Do you see what we mean now?

Lesson learnt: consider thoroughly how and when users will be using your app. If multiple participants are required in your app, really evaluate how they’re both involved.

News flash: the UK is cold. Cold almost all year round. So the idea of carrying a miniature radiator around to warm up our hands wherever we are sounds heavenly.

That’s where Pocket Heat came in, or, well, tried to anyway.

This app turned your phone into a faux heater, not by a miracle, but by putting your iPhone into overdrive and using up 100% of its battery. Great! Because what we all want is a short battery life and a damaged iPhone, duuuh. Apple ultimately told them to remove this feature. Now it just pretends to be warm.

The lesson is simple here - don’t be stupid!

Now, this is a controversial choice, but hear us out. It may be the ultimate fitness app - tracking steps, exercise, counting calories - it’s combined every decent fitness app out there and become the ultimate, but is it really worth it if it doesn’t support or sync with Apple Health’s app?

Users experiencing this problem have had to sync the different data using a third party sync app in order to do so, which is probably more effort for them than is necessary. There are no signs of changing this either.

The moral of this story is to listen to your users feedback and act on it. Negative reviews can be damaging to your app downloads and position in the App Store. Unless, of course, that’s what you want… (we’re pretty sure it’s not).

This one is totally lol-worthy. A mobile phone app on your mobile phone telling you where you can find payphones to phone someone. Need we say more?

You would’ve thought that 2016 was a year where finding a poor app would be a near impossible task. Especially considering all the embarrassing ones we’ve just mentioned that have surfaced in the past, right? Wrong. Gather exists.

Gather acts as a messaging app, (amongst all the others that are already out there), so theoretically, it’d be hard to go wrong. That would be the case, if Gather didn’t act independently. Users have complained that Gather has been sending out invitations to everyone in their contact list without asking for access to their contacts, i.e. no permission. It’s safe to say people aren’t happy.

They’ve tried to rectify this with a recent update that allows users who ‘skipped’ notification permissions to turn them on, but we think the damage has probably been done.

It’s never ever a good idea to do anything without permission - it completely loses trust with your user, so if you are hoping to gather data for your app, ALWAYS ask for permission.

WHAT? Snog your iPhone screen and get a rating on your performance? WHAT?

Who doesn’t love a good phone game to pass time with? Well...us, if it’s filled with large pop up ads, bad graphics, pointlessness and a completely misleading name. We weren’t really sure what to expect with Simulator Hoverboard, but pressing some buttons to collect some virtual coins was not it.

We can at least thank Simulator Hoverboard for teaching us that in order to gain some trust and respect from potential new users, we should at least mostly live up to the name that we’ve titled our app. 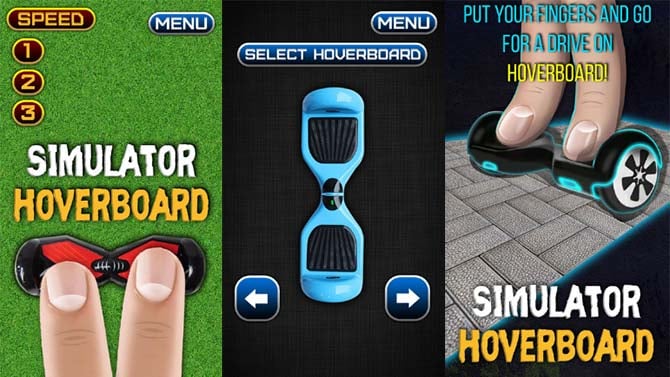 It all comes back to the user. Whilst your app venture might be to make you money or heighten your authority in the industry, if you’re not thinking about how it will really benefit your audience, how they’ll use it or even if they’ll like the design, then your app won’t succeed.

If like these apps, you saw dips in your traffic and engagement to yours, check out our free checklsit on how to tackle this.