7 Best Social Media Campaigns For Mobile Apps – From The Pros

Social media marketing for mobile apps can be a fantastic way to build your following, engage users and direct people towards your app. Sadly, though, we don’t all have a millennial correspondent at hand to guide us through social media’s confusing ways, which means we have to figure things out for ourselves. *eye roll*

From examining the practices of big players in social media and app development, we've uncovered these seven steps to social media success for your mobile app. 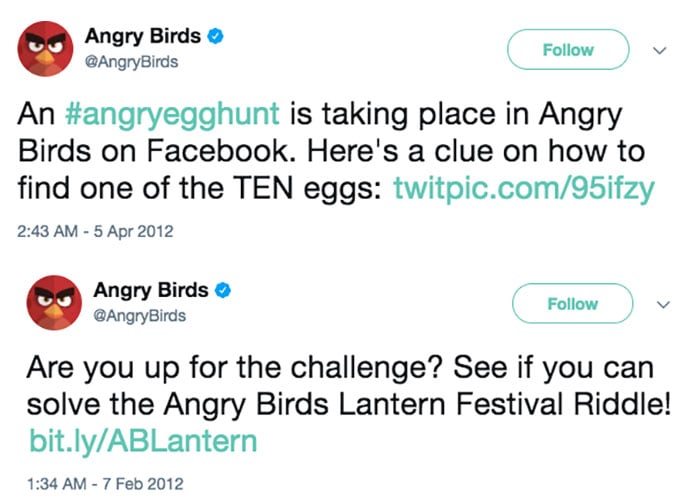 If you think of this as professional social media marketing (don’t), it feels a bit serious. Ultimately, you want people to download your app, enjoy it, and continue to use it, so bring that spark of joy to your social media.

Angry Birds posts on social media in a fun and open way that encourages followers to interact with them. Riddles, poems, cryptic images – whatever the method, they keep things light. Establishing this friendliness in their tone-of-voice makes it more likely for followers to download your mobile app and get in on the angry fun. 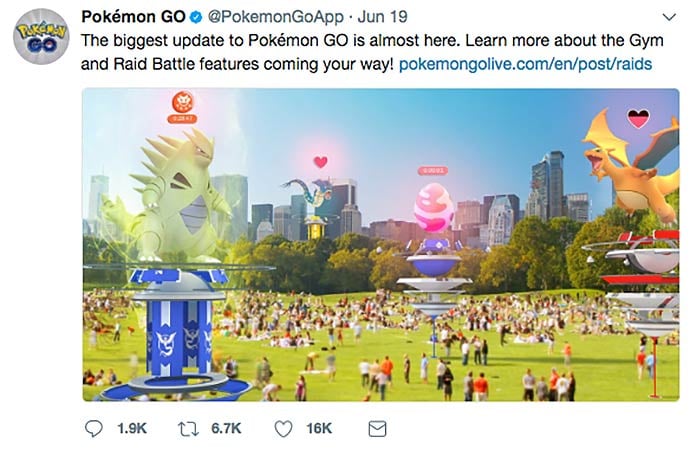 An update can comprise of all sorts of changes, including both visible and behind-the-scenes variations. When you've got an exciting visual update, fly bait in the direction of your followers so that they start to get hyped for release.

At its first anniversary, Pokémon GO teased huge updates through social media. Using simple text, breadcrumbs of info on the specifics of the update and enticing preview images to tease their Gym and Raid Battle features, fans were left desperate to experience the full app update as soon as it became available. 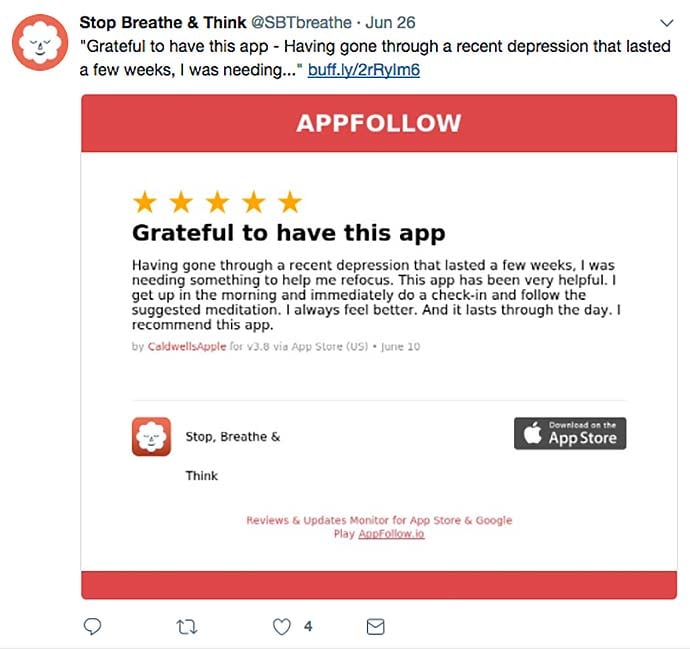 Unlike in day-to-day life, when people say nice things about you or your work online it's actually okay to boast about it! Positivity breeds more positivity, and the opinions of others can sway our online behaviours.

Let followers know that those who've already downloaded your app are satisfied with it. Stop, Breathe, Think, a meditation app, shares its high-scoring reviews on social media to encourage followers who haven't yet got the mobile app to get on with the download. And of course, beside the positive review, include a link to the download.

Find out what else you need to do after your app's launched in our downloadable checklist!

Picture this: you're hungry, you're feeling tired and you wish a plate of drool-inducing food would appear right in front of your eyes. There's an app for that, but we all need a nudge to download it or remember it exists – especially when we’re on the verge of hangry.

Just Eat cleverly runs hashtag-centric giveaways around the times that people usually eat their evening meal. Through their own social media posts, they encourage followers to use specific hashtags, then they choose one of those users of the hashtag to win free food. All along the way, they subtly remind users to download the app by sharing download links. 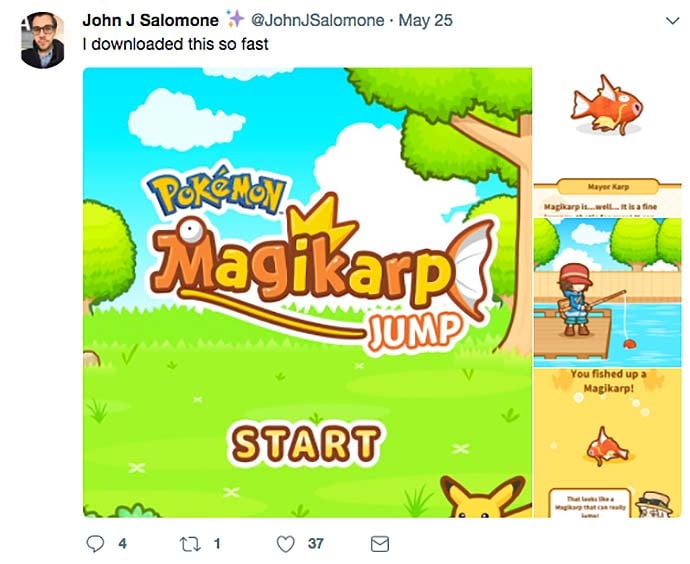 This blog post is not sponsored by Pokemon. We promise.

It can be hard to build up a following of valuable followers on social media, although some people ('influencers') have thousands – sometimes millions – of followers. Here’s an idea. Why not piggyback on one of these influencers?

Take John Salomone, YouTuber, illustrator and video games enthusiast with over 15,000 Twitter followers. He tweeted about a newly released mobile game, Pokémon: Magikarp Jump. In effect, he endorsed it in front of all his followers, many of whom naturally share his interests. People trust people, and outreaching to influencers for some social media coverage to get that desired thumbs up potentially means a whole load of thumbs up from their followers too. 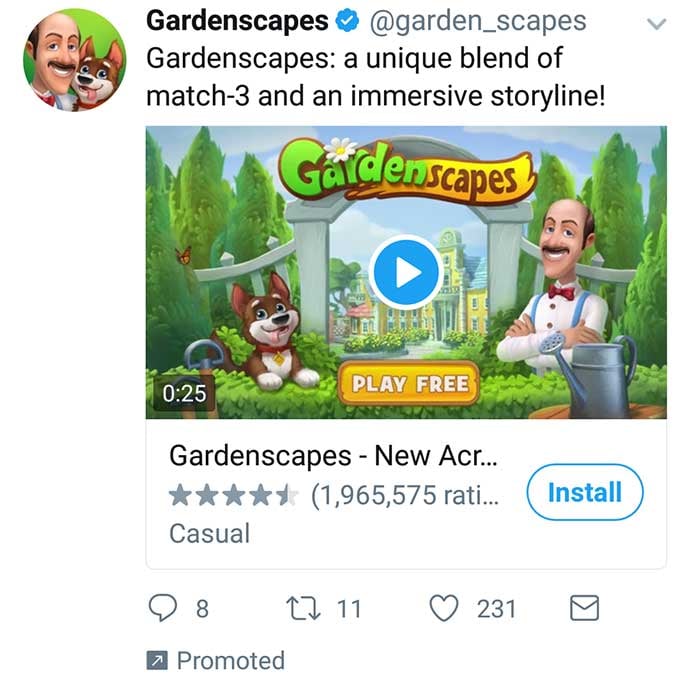 Promoting your posts on social media can help you reach those you're hoping will download your app. If you want to increase the likelihood of your posts reaching 25-34 year olds with dogs in Wales, you got it – it can be done!

Even better, though, by using gameplay videos to promote, you can demonstrate what the user experience looks like. To promote the game Gardenscapes, TERMINAL Studio wrote and promoted posts that contained this gameplay video of the mobile app, with a link to download the game. If users like what they see, they'll only be one click away from your app's download page.

Starbucks: User-Generated Content on Social Media For Your Mobile App 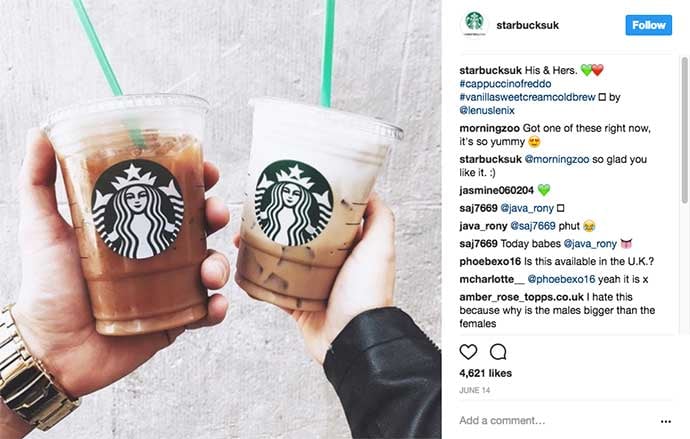 Visuals go a heck of a long way on social media and are proven to increase the likelihood of engagement with a post. Seems like a no-brainer, right? With the likes of Instagram, it's not just the creators of products that take and share photographs; fans of the products do the same thing too.

Starbucks encourages users to interact with them on social media by sharing user-generated content. If a Starbucks fan shares a photo of their drink and Starbucks see it and like it, they may share it to all of their followers. In doing this, Starbucks gets beautiful imagery of its products for free, the fans get exposure and traffic to the Starbucks profile – which contains a download link to their app – rises. All that from a quick pic!

It just goes to show that social media marketing for your mobile app can be both free AND incredibly effective – it’s a win-win!

Marketing is only one part of the post-mobile app launch process though. Find out more in our free eBook!