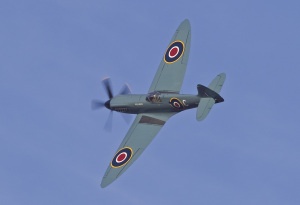 An iPad app developed by Compsoft on behalf of Rolls-Royce was given its first serious outing at the recent Royal International Air Tattoo, one of the largest airshows in the world.

The app performs two main functions: the Flight Checklist feature takes pilots through their pre-flight checks, while the Fly-Past area of the app enables pilots to meet all their fly-past timings with complete accuracy. The app was commissioned by Rolls-Royce Chief Test Pilot Phill O’Dell with the aim of improving both the efficiency and accuracy of his team’s flying.

"Within Rolls-Royce we fly several different aircraft in a number of very different and often demanding roles” said Phill. “The app has really helped improve many areas of our pre-flight preparation, and made life much easier for us.  We can now use that spare capacity to concentrate on other important areas of our flying."

Phill himself used the app in a Supermarine Spitfire at the Royal International Air Tattoo.  Phill went on to say: "Every year we perform a very important flypast at one of the world's largest airshows - The Royal International Air Tattoo here in the UK.  Our flypast is held on the Friday night and is timed to coincide with an amazing sunset ceremony.  Just as the band finishes playing and the sun is setting we arrive in a Spitfire and display.  This year the timing features in the app made for a far less stressful flight.  We were 'on time' to the second but without the usual hard work of navigating using only a 'Mark 1 eye-ball' and map.  It allowed me to concentrate on far more important aspects of the flight and yet still achieve the principal aim.  The app and our development with Compsoft has made that possible and I'm immensely grateful for their hard work. Compsoft's team have been tremendous to work with - professional, with incredible attention to detail and great fun throughout the whole process."